Right Around the Corner

Apologies, dear reader, that I couldn’t write a blog post this week.
I tried on Monday, but as soon as I sat down with my computer my youngest daughter came and asked if I could help her make scrambled eggs for breakfast. She got a kids’ cookbook at her day camp and was beside herself with anticipation, as she is considering attending the Le Cordon Bleu as soon as she’s old enough. She’s seven now, but eighteen is right around the corner.
On Tuesday I mulled over several ideas for a writing topic, but my son asked if we could have a Donut Date. We do that occasionally, when all the other members of the fam are occupied elsewhere and we find ourselves alone. We walk the mile or so down to Dunkin’, have a nosh and a chat, then hoof it back. It takes a little chunk out of the day, but he’s on the brink of twelve, and his departure for college is starting to feel like it’s right around the corner.
On Wednesday I had an idea for what I wanted to write about this week, and I got up early so I could hammer it out while the rest of the house still slept. But then my middle daughter—who usually sees no value to the day until the sun has passed its apex and is on the way down—got up early too, and wanted to discuss something that’s been bothering her. She’s showing the signs of approaching puberty, and I’m terrified for her about middle school because she’s a little too much like me, and junior high was the worst two years of my life, bar nothing. I’d rather have a limb amputated sans anesthetic than live through seventh grade again. So even though my girl’s just ten at the moment, adolescence and high school are going to pass in the blink of an eye. And they’re right around the corner.
Thursday I thought I’d get some time to write in the late morning and early afternoon. Then my husband called to say that his schedule had opened up around lunch, and he asked if I wanted to meet him for a mid-afternoon date while the kiddos were at camp. With three children in the house and all the babysitter-age teens in the neighborhood overbooked with their own hyper-scheduled activities, alone times with the old man are few and far between. So I put on some lipstick, spritzed myself with a shot of perfume, and met my beau for lunch. Because an acquaintance of mine just lost her husband in a car accident. You never know what’s right around the corner. 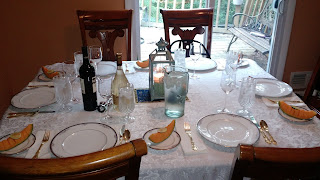 I intended to block out Friday as a writing day, but then found out that a friend I hadn’t seen in fifteen years was in town with her family and had some free time she didn’t expect. I’d never met her children, so I invited them over. As a goal-oriented, time-challenged pragmatist, my natural inclination is to view other people as obstacles to my plans and challenges to the control I exert over my space and time. But I’m learning that relationships are the very heart of life’s meaning and value. As teacher John Keating asserted in Dead Poets Society, “…medicine, law, business, engineering, these are noble pursuits and necessary to sustain life. But poetry, beauty, romance, love, these are what we stay alive for.” Having lost a person I fully expected to see again someday, I want to remember that I never know what’s coming around the corner for any of my friendships.
So, kind reader, I have nothing to offer today. I have failed in my ambitious attempt to write a new blog post each week for one full year. I don’t suspect that my musings are grand or profound or entertaining enough that you will be heartbroken to miss one this week. Still, I feel I have let you down.
But if you’d like to come over and make scrambled eggs, go for a donut and coffee, sit with me to talk about navigating life, have a lunch date or pop in for dinner, I’m here for you.
I can always write later. Because the stage of life is coming when I’m no longer so needed and stretched and fragmented, and the unfilled hours of the day yawn in front of me like an empty road.
It’s probably right around the corner.

Lost is a State of Being (When You're Me)

The 10 Commandments: You've Missed the Point

ON THE AIRPLANE: A Conversation with God

In honor of all the people traveling with small children this summer...

My one-year-old son and I were flying home after a visit to the grandparents.  Ecstatic about an airplane ride, he bounced up and down on my lap for the first ten minutes of our trip.  Then he stopped laughing and froze.  His face turned beet-red.  One emphatic grunt later and Eau de Poopie wafted from Seat 3C.
Do not be far from me, for trouble is near and there is no one to help. (Psalm 22:11)
I had to act fast.  The diaper bulged with toxic, chunky goo.  The infant car seat took up half our space.  Could I change him on the tray tables?  What if the oxygen masks dropped?
“What shall I do, Lord?” I asked. “Get up,” the Lord said… (Acts 22:10)
I grabbed a diaper and the box of wipes and whisked my child to the lavatory.  When I sat him on the toilet lid the lighted flush button caught his attention.  He pushed it.  Whoosh!  He cackled maniacally.
Now, my son, listen carefully and do what I tell you… (Genesis 27:8)
“Stop that!”  I pulled his hand away as he giggled.  I dropped the wipes and diaper on the miniature tray below the mirror and they tumbled into the sink.  He flushed the toilet again.  Whoosh!
My child kicked with glee.  I stood him up to pull down his pants.  Then he spied the garbage spilling out of the waste slot and grabbed a fistful.  I snatched his hand away and pushed the trash further down.  “Why is he behaving like this?” I cried.
Man born of woman is of few days, and is full of trouble. (Job 14:1)
The boy hadn’t yet finished with the trash.  Poke and grab.  Giggle and snort.  I immobilized his hand.
Listen, my son … and do not forsake your mother’s teaching. (Proverbs 1:8)
“Quit it!”
I pulled off his pants, tossed them aside and plopped him back onto the toilet lid.  I’d have to change him sitting up.  Whoosh!  The flush button captivated him.
I tore open the diaper tabs, then wrapped one arm around him to hoist him up while I pulled off the vile, saturated diaper.  As I rolled up the oozing mass and stuck it through the waste slot, he thrust his hand inside again.  I yanked him up and twisted him away.  “I can’t control him, Lord!”
Do not be like the horse or the mule, which have no understanding but must be controlled by bit and bridle... (Psalm 32:9)
Hmmm.
“Knock it off or I’m going to hog-tie you,” I hissed.  Clutching my firstborn against my chest, I fumbled with the box of diaper wipes.  He reached for the soap pump.
My son, pay attention to what I say; listen closely to my words. (Proverbs 4:20)
“Stop it!  I mean it!”
They would not listen, however, but persisted in their former practices. (2 Kings 17:40)
I wiped his hands, then tried to mop up his behind.  He laughed and wiggled.  The clean diaper refused to open.  The boy kicked and stomped like a Russian dancer with fire ants in his underwear.  I couldn’t manipulate the diaper into position.
…Why do you persecute me? It is hard for you to kick against the goads. (Acts 26:14)
I needed both hands, so I put my foot up on the edge of the toilet and dropped the boy down to straddle my thigh.
Then I realized what I’d done.
Her filthiness clung to her skirts…
He was buck-naked from the waist down.
…she did not consider her future…
He just had a dirty diaper.
…Her fall was astounding; there was none to comfort her…
I was wearing white pants.
…Look, O LORD, on my affliction, for the enemy has triumphed. (Lamentations 1:9)
I spread open the new diaper and maneuvered him onto it.  Whoosh!  I pulled up on the back of the diaper with my right hand, on the front with my left.  Whoosh!  Whoosh!  Whoosh!
“Stop pushing that button!” I hissed.
But they refused to pay attention; stubbornly they turned their backs and stopped up their ears. (Zechariah 7:11)
I cinched the diaper closed and retrieved his pants from the floor.  He grasped two hunks of hair on either side of my head and swung from them while I dressed him.
We exited the lavatory.  People stared with expressions of concern, irritation, and alarm.  My son laughed and waved.
I strapped my child into his car seat and thrust my finger toward his impish little face.  “Enjoy the rest of this flight, because you will not see the inside of an aircraft again until you are old enough to pilot one.”


Get Wasting My Education Delivered!

The above is excerpted from Year-in-Review: the Entirely True Histories of a Perfectly Wretched Family, available at Amazon and most major online retailers.
Posted by Wasting My Education at 8:16:00 AM No comments: