I would not want to besmirch acquaintances’ reputations by suggesting they may struggle with truthiness. But really, a fair number of Facebook statuses, Twitter twits, and holiday letters prompt me to scream, “Liar, liar, pants on fire!” Because sometimes I know that ain’t how it happened.
Like when a friend and I both wrote our first novels. We signed up for a writers conference, expecting to be overrun by publishers, editors, and agents clamoring to sign us for million-dollar book deals. (By the way, the chances of going home from your first—and often subsequent, and next, and the one after that—writers conference anything other than depressed, in career/existential crisis, and planning a bonfire for your manuscript are more miniscule than getting hit by lightning on the same day you win the lottery and receive a proposal of marriage from Ryan Gosling. In my experience, anyway.) Later that year, while I still licked my humiliated wounds, my friend sent out her Christmas letter and wrote, “I’m meeting with a literary agent in April to discuss publication of my novel!”
What the—?!?
Yeah, I looked into it and found out she’d signed up for another writers conference the following spring. So technically, she wasn’t lying in her year-end update.
But come on.
This dressing-up of the facts does, however, seem to be a widespread trend, especially with the proliferation of social media. So, rather than buck the system, I have given much thought and study to the creation of alternate forms of descriptive reality.
Some call it “spin”.
Just as we spiff up our resumes, put concealer on our pimples, and sweep the crud under the rug when guests come over, here are some ways to re-cast that life of yours and make all your friends and associates jealous about the perfection that is you:

If you’ve been floundering through your updates, feeling insecure and intimidated by the enviable and unbelievably wondrous lives of others, I hope this little tutorial will speed you on your way to joining the ranks of the veridically-dubious sugar-coaters.
Of course, this system also works in reverse. Next time you read about your college roommate’s kid who can do Calculus derivatives in his head while flying like Superman and curing cancer with his saliva, try to take the assertion with a grain of salt. The truth could be that he fell off the roof of his dorm in a drunken, drooling stupor and has become an idiot savant who pays his bills by serving as a professional guinea pig for a pharmaceutical company.
The truth is out there. Even if it’s spinning like an LP set on 45 rpm.
And if Ryan Gosling is reading this, I bet he has no idea what that last sentence even means.
Posted by Wasting My Education at 1:56:00 PM 2 comments: 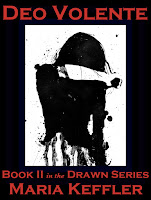 In a shameless act of wanton advertisement, this week’s blog installment at Wasting My Education comprises the first chapter of my newly released novel Deo Volente. Deo Volente is the second in the DRAWN series of three books about Juliet Brynn, an artistic prodigy who discovers that her artwork can predict the future.

THE LITTLE SHOP OF HORRORS

The five words at the top of the poster, painted fuzzy-stem green and tipped in fat drops of blood, made me even more desperate to do what I already wanted to do, which was turn and run.
It’s only a new school. Just one more cruddy part of the cruddiness that is your life.
My eyes scanned the rest of the poster that someone taped off-center and cockeyed over the glass front door.

Third hour was science. Just plain science, not honors. Everyone sat in pairs at two-person, black-top tables. I stood in the doorway and waited for the other kids to sit down.
Aisha, from homeroom, grabbed my arm as she walked in. “Come on. My partner moved, and I’m not doing labs by myself this semester. Sit by me.”
I saw two more people from homeroom, besides Aisha. Chad sat one row over, catty-cornered behind us next to a kid who looked just like Alfred E. Neuman, and Grace waved two fingers at me from across the room.
The teacher, Miss Dupree, held her attendance book against one forearm and checked off names.
“Ackerman. Brynn. Bugler, Caprio…”
A paper airplane sailed forward from the back of the room and hit the chalkboard next to Miss Dupree’s head.
“Oakley, Otterman, Russell…”
Another airplane coasted to the front of the room and struck her just below her collarbone.
“Boys!”
Miss Dupree bent down, picked up both airplanes, and tossed them in the trash.
“Hey, I spent like five minutes on those,” came a voice from somewhere behind me.
A group of boys snickered.
She finished attendance and sat down at her desk. “Open your books to chapter seven and read.”
“Read how much?” Chad asked.
“Till I tell you to stop,” Miss Dupree twittered, then sat down at her desk, opened a notebook and started to write.
I raised my hand. “Excuse me, Miss Dupree? I don’t have a textbook yet. I’m new.”
She opened the deep, lower drawer of her desk and pulled out a fat, hardbound book with an enormously close-up picture of a snail on the front.
I went to get it from her. “Thanks.”
In the back of the room a group of four boys clustered around a table. They whispered and laughed. The two with their backs to the front slipped around to the other side of the desk then, and all four stood up. They simultaneously drew back their right arms and launched four white airplanes in perfect unison.
Three of the planes flew straight forward together, lined up like a trio of Thunderbirds. The fourth one, however, peeled off, did a loop-the-loop, arched toward the ceiling, then spiraled straight down into my hair.
The boys roared, and one of them slapped another on the back. “Yo, Bobby! You got the new girl!”
I detangled the plane from my hair and laid it on Miss Dupree’s desk as Bobby grinned at me.
The tallest of the four, with careless shocks of wavy, blond hair that flopped across his forehead and over his ears, had to be Kari Ann’s Bobby Russell.
Miss Dupree scowled. “To the office.”
“But we’re studying flight,” one of them argued.
Bobby elbowed him and shook his head. “Come on.”
“Flight’s science, right?” Another one of them shrugged and turned up his palms.
Back in my seat, I watched the four file out of the room. Bobby turned back and mouthed, “Sorry,” to me. I shrugged and grinned.
Aisha looked at me across her shoulder. “Don’t fall for him,” she whispered.
“I’m already going with someone,” I told her.
“Okay.”
“But anyway, why not?” For Kari Ann’s sake, I hoped Bobby didn’t have a girlfriend.
“Half the chicas in the school like Bobby.” She rolled her eyes.
I grinned. “Including you?”
“Please, girl.” Aisha turned a page in her book. “I date high school guys.”
“Is Bobby one of those jerks who sees how many girls he can go with?”
“No, not like that. Bobby’s okay. He’s really a sweetie. He’s just kind of clueless.”
“So why the warning?”
Aisha shook her head at me and grinned. “For your own good. Bobby breaks hearts and doesn’t even know it.”
That settled it. If God let me, I’d do whatever I could to help Kari Ann catch Bobby Russell.