How to Catch a Woman 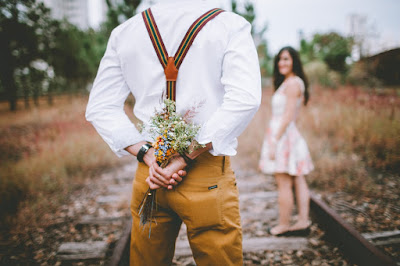 A friend of a friend on Facebook posted about his frustration with dating apps, and he wondered, “Where are all the nice ladies?” He went on to explain that all he wants is someone who’s a housewife type who will keep him company and watch sports with him.
On the one hand, I have to tip my hat to his honesty and bald-faced self-awareness.
However, I replied that I don’t know many women who want to be wanted for being good housewives.
In fact, let’s turn that around and see how it sounds from the other direction: “I just want a man who’s a doctor/musician/Marine who will bring me flowers and be my date at family weddings.”
There are women who want nothing more in life than to be wives and mothers. That’s as noble an aspiration as being a surgeon, violinist, or soldier. But those women don’t want to be pursued because they’ll do your laundry, cook your meals, and raise your kids, any more than a man wants to be valued for his job title or for the paycheck he brings in.
Everyone wants to be loved for who they are, not for how they’ll make you happier.
In this swipe-right/left society, we’re bombarded with messages about how to improve our own lives. Marketing is all about getting us to think about ourselves—even jewelry ads target men’s egos with the tag line “Make her fall in love with you all over again.” The sweeping majority of modern love songs focus exclusively on how the singer’s object of fascination makes him or her feel.
But what do you really want from a significant other? Isn’t it to be admired and appreciated for who you are? Don’t we want our beloveds to find us fascinating and interesting and irresistible? And to support us emotionally, socially, and psychologically when we need it?
That goes both ways, guys.
So, if you want a good woman (as opposed to a hookup—if that’s all you’re looking for then close this page now because you’re a shallow jerk and the pointers below will help you be a shallow jerk to even more women than you already have), here’s how to start being a desirable man:
1. Focus on who she is more than on what you want from her.
“Do you like monster truck rallies?” is a fair enough question, and it lets her know what you enjoy. But instead, how about starting with, “What do you like to do on the weekends?” The former question is more about you than it is her. The latter is open-ended, and shows an interest in who she is, rather than on what you want her to be.
2. Listen more than you talk.
Men—and sometimes women, too—have a tendency to fill every second with chatter about themselves. It’s not always bragging, but sometimes just a result of nerves, habit, or a lack of competence in the give-and-take of a real conversation. If you do this, stop it. Silences are not your enemy, and in fact can lead to unexpected topics, enjoyable nonverbals, and/or intriguing eye play. This two-minute tutorial on how to break into a man’s over-talking jag is meant for women, but reveals a lot about women’s frequent experiences with dating. It also offers one possible explanation why that woman you thought was so into you deleted your number from her phone after your first date:

3. Be real.
Full disclosure, not every woman wants a man to be honest about who he really is. But if you’re looking for a long-term, solid relationship, this is important. Be honest not only about your successes and selling points, but also about your failures and flaws. I started to fall for my husband not when he told me about what a hero he’d been at work that day, but the next day when he emailed me to say, “Everything that went great yesterday I blew today.” As he vented the ways he’d screwed up—which I never would’ve known about otherwise—I realized that here was a man I could trust to always be honest with me. That’s gold.
If I could leave my Facebook friend with just one piece of advice, it would be this: Ask yourself not how a woman could improve your life, but how you might improve hers. Most women today don’t need men to support them financially, nor do they need a man’s last name to lend them credibility as fully-arrived adults. What women really want is a partner who will add value to their own lives.
Egocentric boys looking for Mommy replacements need not apply.