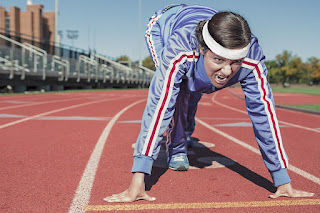 Minutes before the first race I’d ever run, as the man in charge pointed to the wooden campground map and explained the tortuous path and sketchy terrain we would have to navigate, I whispered to my thirteen-year-old daughter. “I only see one or two other women who look like they’re in better shape than we are.” I also figured that at least a third of the twenty-five or thirty people running the Fall Festival 5K would probably walk it as a nice afternoon stroll through the woods.
Then the organizer yelled, “Ready… Set… Go!” and every single person there—including my own child—sprinted off the starting line, zipped down the paved path into the woods, and left me in a wake of dust.
I’m pacing myself, I reasoned wisely. These are clearly inexperienced fools who will burn themselves out after the first half mile, and I will calmly pass them one by one, like the proverbial plodding tortoise whose steady relentlessness takes the day.
After about a K and a half I finally got past the five-year-old who repeatedly whined to his dad, “We’re almost done, right?”
By the time I caught sight of my daughter again I’d revised my race goals from “Place at least third” to “Cross the finish line unassisted.”
As I approached my child she glanced back over her shoulder, saw that the footfalls she heard were mine, and broke into a fevered sprint. “I’m not letting my 49-year-old mother beat me!” she bellowed up into the trees.
I am going to get ahead of her and stay ahead of her and beat her snotty little carcass to the finish line if it’s the last thing I do in this mortal life, I resolved.
I ran flat-out to catch her, then she ran flat-out to stay ahead of me, then I slowed down, then she slowed down, then I ran flat-out to catch her, then she ran flat-out…
After we performed that combative pas de deux five times I called ahead to her. “Look, I promise I’ll let you come in ahead of me. Just wait for me and let’s do this together.”
“Why?” she called back suspiciously.
“Because it’s more fun to be together and enjoy each other’s company.”
“You sound like a Disney movie,” she sneered, but agreed to my terms.
At the second water stop we each chugged a bottle and I asked the woman stationed there if we were about half way. I hoped she’d say, “three-quarters,” or “four-fifths,” but she nodded. “Yep. Half.”
$#*@!%, I thought.
We took off again and shortly came to a fork in the path.
An unmarked fork.
We stopped and tried to remember what the map looked like. “Are we supposed to go left or right here?” my daughter asked.
I have the navigational abilities of a blindfolded dyslexic with a memory-impairment disorder. “You’re asking me?”
“Oh, right. Let’s go this way.”
Before long we came to another unmarked fork. And buildings. And a mom pushing a stroller toward a playground.
We heard cheering, turned toward the sound, and saw the finish line.
“Come on!” my daughter yelled and took off toward the ticking marquis clock. “We’re under forty minutes!”
Wow, that last half went really fast, I thought.
People lined the final, paved stretch of the race and applauded as we crossed the line.
Hang on a minute…
“I think we made a bad turn,” I told my daughter.
We consulted the man in charge of the race and looked at the map. “I think we went wrong after the second water stop,” I said.
“Did you go right or left there?” he asked.
“Left.”
“You should’ve gone right.”
We’d clipped nearly half the track with our unintentional short-cut.
I told him we’d have to disqualify ourselves because it wasn’t fair for us to get any of the top three prizes when we’d run less than 3K.
“Don’t worry about it,” he said. “We’ve already awarded the top three.”
There needs to be a slack-jawed Emoji eating crow with a fuchsia blush of humiliation in its cheeks. Some of those people I’d disparaged as so far beneath my fitness level had finished a full 5K in less time than it took me to do 2.5.
The jury’s still out on what I learned from this. I’ve been working on my critical spirit for several decades now, but I’m not sure it’s waned one judgy little iota. I hoped maybe by entering a race I’d find my inner FloJo and get that runner’s high I’ve heard about but have yet to experience in the six or so years I’ve been forcing myself to do this tedious and painful activity. But that’s still a nope.
Maybe what I learned is I did the best I could, and so did everybody else, and sometimes that’s all it takes to call yourself a success.
Yeah, I’m going with that. 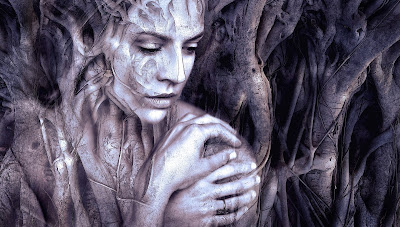 My husband and I were talking about the Kavanaugh hearings when I asserted that if I took a poll of all the women I know who are around my age (pushing fifty), I’m willing to bet that more of us have been sexually assaulted and/or date raped than not. I added that, gratefully, I am one who has not.
Then I remembered an incident my freshman year of college that would qualify, by the strictest definition, as sexual assault. My female friend and I were studying with a classmate of hers in his dorm room. We all started getting silly and pretty soon the three of us were tickling, pushing, and wrestling. Then the guy pinched my right nipple.
I remember vividly which nipple it was, because even as I recount this humiliating experience, I can still feel his fingers close on it.
The incident ended when I slapped him across the face—to which he made a snide remark—and then I left.
When I began to tell my husband this story, here’s what I heard myself say:
“There was this one thing that happened, but it was really stupid of me to have put myself in the situation that I did.”
I blamed… myself.
A guy I hardly knew, who maybe hoped he was about to get a threesome, chose to grope a sensitive and private part of a body whose owner he hardly knew, rather than exercise any other possible option. He might’ve tried to kiss one of us if he genuinely thought the evening was going that way. Or he could’ve simply asked if we were interested in a romp. But instead, his first impulse was to go after the nearest boob.
I never told anyone about that evening until I sat across the dinner table with my husband thirty-some years later, both because it seemed trivial compared to what other women I knew had suffered, and I figured anyone I told would say something like:
It doesn’t sound like you were there to study.
What did you expect, when you started wrestling with him?
You’re lucky you weren’t alone with him.
(That last one’s probably very true.)
I doubt if that guy has any memory of this incident. I’m sure it was no big deal to him, except that he didn’t get what he was hoping for that night.
But today, I’m less angry that he honked me than I am that I took responsibility for it. And I’m angry that he got away with nothing more than a slap on the cheek and some sexual frustration. And I’m disappointed that some people will read this and still think it was my fault, that it was no big deal, that boys will be boys, that I got what I deserved for being young and stupid and there.
This has always been and still is a country where men can do what they like to women, with little consequence, in my and many of my female friends’ experience. And I’m as guilty as anyone for letting it continue to be that way.